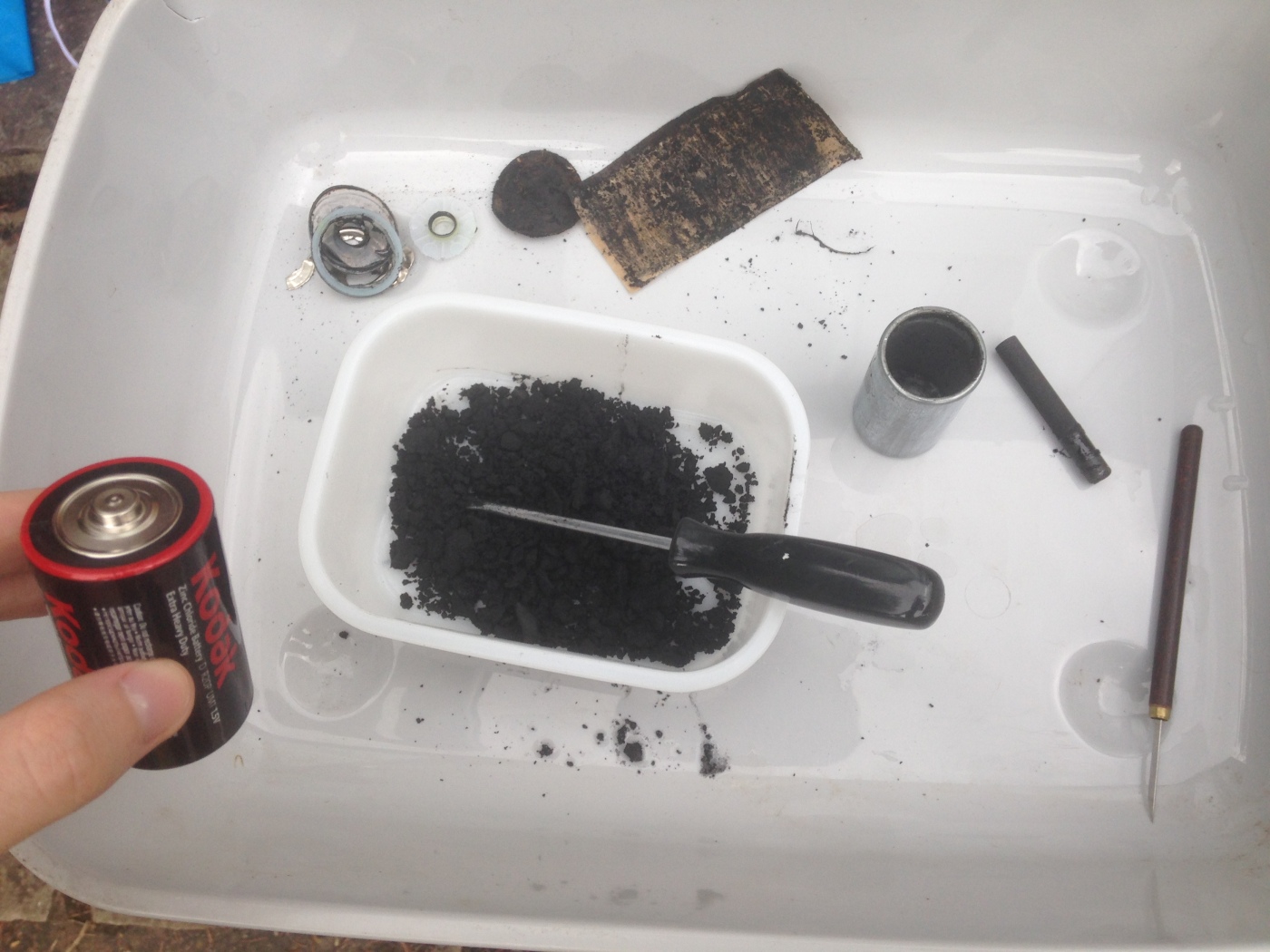 Abstract:
Many commercial batteries house hidden gems when it comes to their chemical compositions and the Zinc Chloride battery is no exception. I will be attempting the common extraction of a variety of materials, such as manganese(IV) oxide, zinc and carbon electrodes, from these batteries due to their many uses for the amateur chemist who is always looking for OTC resources.

Immediately you can see the potential of these batteries, along with most other Zinc Chloride battery brands, with dozens of uses for the chemicals they employ once extracted. Manganese dioxide particularly stands out. With a more correct IUPAC name of manganese(IV) oxide, this metal oxide has a range of uses as a catalyst, an oxidising agent, or as a source of manganese metal along with being great in a thermite mixture. The purity reveals a problem though, as zinc chloride and ammonium chloride is mixed in along with (I have heard) carbon for better conductivity.

The zinc metal also entails a few uses although I only plan to make a few zinc salts as I currently do not have much use for zinc. Although only being contained in a much smaller percentage, the carbon is found mainly as a big, single graphite electrode extremely useful for a multitude of electrolysis reactions. Really only the zinc chloride and ammonium chloride are not worth extracting due to the tiny amount present and the difficulty in doing so in the first place.

The desired materials will be collected and, although the manganese(IV) oxide requires vigorous purification, I will not feature anything past good old water washing as I currently do not need anything other than crude manganese(IV) oxide. Also a bit of scrubbing should be enough for the carbon electrodes and zinc, but if you want a better way to remove the manganese(IV) oxide contamination on them and make them a little more pure or clean, check the last bullet point in the safety section directly below.

Eventually, once I acquire a better source of sulfuric acid, I will attempt a proper purification of manganese(IV) oxide. I am sure you will find that for most insensitive amateur applications crude manganese(IV) oxide should be adequate, for example, as a catalyst for the decomposition of hydrogen peroxide into water and oxygen for the means of acquiring oxygen.

Experimental:
The brand of Zinc Chloride batteries I used (Kodak) was very different to other brands which I had based my method on. I mostly had to use my common sense and knowledge to guess how to take apart the battery as I went.

An open, rimmed, plastic container helped contain the experiment and any contamination. I initially took off the plastic wrapping although this was found to be a bad idea and it was better to leave it on, acting as insulation to help prevent shorting out of the battery until we had removed the carbon electrode.

Results:
In total, four Kodak D Zinc Chloride batteries were opened, each taking ~1 hour with the first couple of batteries taking slightly longer as experience was gained. I would not attempt opening anything below D size batteries. If you are feeling particularly patient then maybe minimum C size batteries but definitely nothing below that size unless you just want to get the carbon electrodes and throw away the rest of the battery. This is just because the effort is not justified by the miserable product recovery in these smaller batteries. As NileRed on YouTube says well:

“If you had to do this process with AAs or AAAs, I would just really feel bad for you.”

I have used the manganese(IV) oxide as a catalyst in the decomposition of hydrogen peroxide as a source for oxygen for uses such as mixing with hydrogen to test the energy it gives out in the form of a hydrogen rocket and it works perfectly. I have also used the carbon electrodes in a few electrolysis projects and they function great.

YouTube channel NurdRage – Get Zinc, Carbon Electrodes and MnO2 from a Lantern Battery:

6 thoughts on “Extracting zinc, MnO2 and carbon electrodes from batteries”

Copyright © Samuel Hutchins-Daff and 18thTimeLucky – Amateur Experimentalism, 2017-2018. Unauthorized use and/or duplication of this material including photos without express and written permission from this site’s author and/or owner is strictly prohibited. Excerpts and links may be used, provided that full and clear credit is given to 18thTimeLucky with appropriate and specific direction to the original content.

Use At Your Own Risk

I do not make any warranties about the completeness, reliability or accuracy of the information and articles provided on my blog. Any action you take upon the information on this blog is strictly at your own risk and I will not be liable for any losses, damage or injury or other effects in connection with the use of information given on this blog or on any external web pages linked to from this blog.