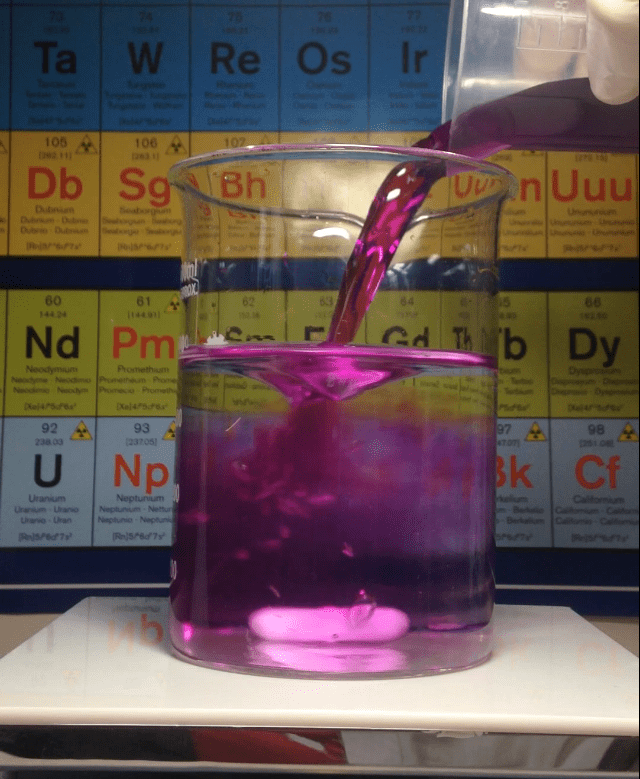 Abstract:
It can be hard to visualise the oxidation states of transition metals but this demonstration has you covered. The rich array of colours of manganese in each of its oxidation states never ceases to amaze. Purple, green, blue, orange. You name it, manganese has it. Exploiting this ability of manganese, and a hydroxide and reducing sugar, this simple to set-up and non-toxic reaction self cycles through almost every colour of the rainbow. It really does earn the name of the Chemical Chameleon!

Introduction:
Transition metals are the fashion models of the periodic table. With many beautiful colours at their disposal, it is no surprise that the transition metal manganese, able to achieve stable oxidation states up to +7, is currently one of my favourite elements. The Chemical Chameleon demonstration aims to share multiple oxidation states of manganese in just one reaction, giving a reaction mixture that switches between various colours.

Our source of manganese will be potassium manganate(VII) (also known as potassium permanganate). This already vibrant purple form of manganese is beautiful in itself, but with the collaboration of sodium hydroxide and sugar, green and orange can also be achieved as well as a multitude of shades in between the three.

The overall equations are partially constructed by me so please excuse them if they turn out to be wrong! I hunted all over the internet for the best part of three hours for the overall equation. I scanned through my bag of scavenged equations from various articles but none could tell me quite what were the final products other than manganese(IV) oxide and a slightly different sugar. In the end I found a couple of equations, funnily enough on Wikipedia, that if modified with the knowledge from a few other sources seemed to make the most sense out of everything I had seen.

Also sucrose, usually used in the form of cane sugar, is interestingly recommended for this reaction by a few. The whole point of the sugar is to act as a reducing agent in the reaction, however sucrose is a nonreducing sugar. Cane sugar does seem to function as a reducing agent though as I completed the Chemical Chameleon with it half a dozen times and had no problems getting it to work. C6H12O6 is sometimes said to be used so I assume that sucrose does not work for this reaction but monosaccharides, such as glucose, do work as they are reducing sugars and cane sugar must therefore contain a small amount of them. The C6H12O6 would then be oxidised to C6H12O7 such as gluconic acid or something similar. Either that or the sodium hydroxide allows the sucrose to act as a reducing sugar.

This is all speculation on my part so if anyone more experienced could lend a helping hand I would appreciate it! I am very surprised how difficult it is to find out detailed information on this popular reaction.

Gloves and goggles should always be worn when handling chemicals to protect your sensitive eyes and skin.

Experimental:
The demonstration is simple to get to work, but difficult to get just right. It really just takes some trial and error to find the best ratios for you. The amount of potassium manganate(VII) is the biggest deciding factor on how the reaction will turn out: too little and the colours will be too faint to see, too much and the colours will be too strong to distinguish. Due to the trial and error being involved, I will just show you my third and last attempt at the reaction that I was satisfied with.

To a 500ml beaker 350ml of distilled water was added. Tap water should work too, but I can not verify this. The beaker was placed on my brand new hotplate stirrer (show off) and the stirring was switched on medium to get the reactants dissolving quickly when I added them.

You do not need a magnetic stirrer for this demonstration but I highly recommend it. Without proper stirring the colour change is very uneven and not uniform. This can sort of add an interesting effect if you want it, but strong stirring gives the best demonstration in my opinion. Fast swirling or stirring with a glass stir rod should be about adequate but this motion can disturb the viewing pleasure of the observer; leaving the reaction to do its thing by using a magnetic stirrer adds an extra ‘wow’ effect to the demonstration.

Despite the measurements being extremely rough, I nevertheless busted out my 3 decimal place scales to measure out exactly 10g of sugar. This was then added to the solution to dissolve. Again, cane sugar should work fine for some reason, but glucose if on hand should work much better I think. Glucose can usually be bought under the name of dextrose (dextrose is slightly nicer to say than D-glucose).

Dissolving the sodium hydroxide is exothermic and slightly raises the temperature of the solution. I left the solution to allow everything to dissolve and to let it cool down a bit. If the temperature is too high the reaction will happen too fast in my opinion to appreciate so I prefer room temperature and the concentration of reactants I use here. This allows the reaction to last just under a minute, giving the most bang for your buck without taking too long. Solution A is now complete! 10g of sugar and 5g of sodium hydroxide dissolved in 350ml of distilled water.

Next I prepared solution B. The amount of potassium manganate(VII), contrary to the sodium hydroxide and sugar, needs to be quite precise. I found the tiny amount of 0.01g worked the best for a consistent colour change. This is dissolved in 50ml of distilled water. It you increased the amount of potassium manganate(VII) you use by a little bit it is possible to achieve a final red colour after the normal orange due to more manganese(IV) oxide forming. I was very happy with the colour change by the method I show here but I invite you to experiment to find better proportions of reactants yourself!

Results:
I will leave you with the pouring of solution B into solution A to start the reaction with only the odd remark. I hope you enjoy the magnificent colours manganese achieves in this reaction, the demonstration truly earns the title of the Chemical Chameleon!

ThoughtCo. – How To Do the Color Change Chameleon Chemistry Demonstration:
https://www.thoughtco.com/how-to-do-color-change-chameleon-4057571

One thought on “The Chemical Chameleon demonstration”

Copyright © Samuel Hutchins-Daff and 18thTimeLucky – Amateur Experimentalism, 2017-2018. Unauthorized use and/or duplication of this material including photos without express and written permission from this site’s author and/or owner is strictly prohibited. Excerpts and links may be used, provided that full and clear credit is given to 18thTimeLucky with appropriate and specific direction to the original content.

Use At Your Own Risk

I do not make any warranties about the completeness, reliability or accuracy of the information and articles provided on my blog. Any action you take upon the information on this blog is strictly at your own risk and I will not be liable for any losses, damage or injury or other effects in connection with the use of information given on this blog or on any external web pages linked to from this blog.